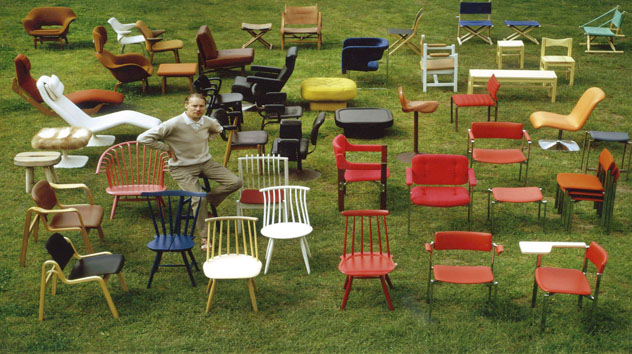 Originally trained as an interior architect, Ilmari Tapiovaara followed an extensive career in design. He was the artistic director of a furniture factory, a teacher, an expert serving in development cooperation and the head of his own design office, among other work. Tapiovaara was a charismatic speaker and skilled writer with a public presence as a spokesman for modern professional design.

The Ilmari Tapiovaara centenary exhibition presents one of Finland’s most significant designers in broad perspective. The numerous sketches, items of furniture, interior designs and personal items on show lead the viewer through Ilmari Tapiovaara’s life, presenting his development from an internationally oriented student to a prolific and responsible designer of the post-war years of reconstruction. His work is considered in particular from the perspective of the social responsibility of the designer. The exhibition also notes the significance of his wife and colleague, interior architect Annikki Tapiovaara as an important background figure.

The exhibition is produced by Design Museum. The curatorial working group consists of curators Suvi Saloniemi, Salla Heino and Harri Kivilinna. The exhibition design is by Henri Halla-aho. The book Ilmari Tapiovaara – Life and Design appearing in connection with the exhibition is edited by Aila Svenskberg with articles by Professor Pekka Korvenmaa of Aalto University, researcher Susanna Aaltonen PhD of the University of Helsinki, curator Suvi Saloniemi, editor Aila Svenskberg and Professor Jonathan Woodham of the University of Brighton.