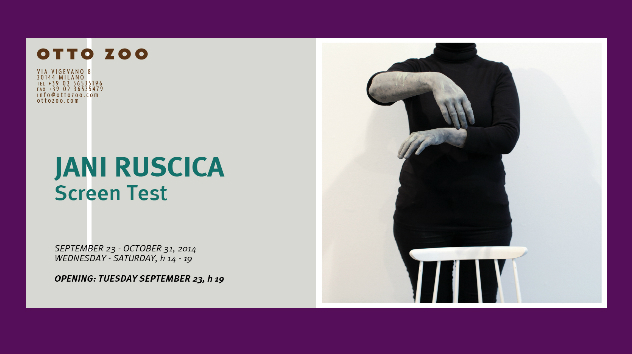 
Jani Ruscicaworks primarly with video, photograhy, sculpture and other media exploring the connections between cinema, theatre and perfomance.

His reaserch, based on humanistic and anthropological bases, reflects on how the perception and the definition of a place are influenced by individual experiences, cultural and even scientific factors. In his practice, he confronts the history and the temporal stratifications of a site with contemporary zeitgeist; thus, he generates complex and singular semantic implications.


His second solo show at OTTO ZOO develops starting from a video, Screen test (for a Living sculpture) (2012, multichannel installation 16 mm transferred to HD,3’)
a subtle study on sculpture and on form, duration and the performative act. Realized in collaboration with artist Sini Pellki and with a commission
of MoMA PS1 and Creative Time MTV’s Art Breaks, the film is a three channel video depicting a living sculpture where, with a minimal swerve,
stasis breaks into movement.

Connected to this video are also two series of works referring to the film production phases: a set of photographies of the two protagonists
and a set of mixed media collages, Material Studies, which wander about the concept of matter and plasticity.