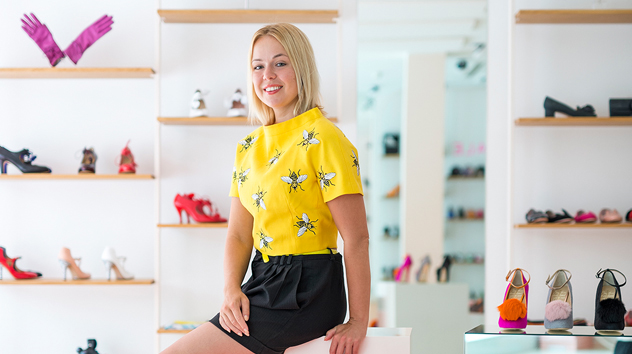 
Minna Parikka is one of Finland’s best-known footwear designers. She studied shoe design in England and after graduating went on to work in London, Milan and Barcelona. She founded her own Minna Parikka brand in 2005. Typical features of footwear by her are femininity and playful, even surreal, elements. Her brand has had international exposure ever since its launch and it is sold in Europe, Asia and the United States.

The prize is awarded this year for the first time to only one person. The prize jury observed that Young Designer of the Year Prize, which is usually given as a form of professional encouragement, is now bestowed also in recognition of achievement. Minna Parikka has succeeded in creating significant and economically profitable business in Finland in the difficult and rare field of footwear design, and developed her unique approach in a persistent and goal-oriented manner. Her ambitious attitude and energy are reflected in the success of her brand both in Finland and abroad.

Design Forum Finland’s Young Designer of the Year Prize was instituted in 2000 and is now being awarded for the 13th time. The Prize can be awarded to individuals or groups displaying new creative concepts and skills in design. The €5,000 prize is intended as professional encouragement for young designers to engage in uncompromising and distinctive work.

The jury for the Young Designer of the Year Prize of 2014 consisted of Professor Timo Salli of Aalto University, Chief Curator Suvi Saloniemi of Design Museum, CEO Teemu Suviala of Kokoro & Moi and CEO Mikko Kalhama of Design Forum Finland.

The Young Designer of the Year 2014 exhibition