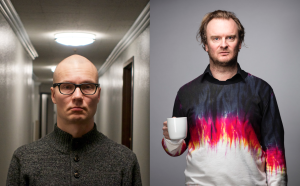 The jury was impressed by the inventiveness of the proposal, its subversive humour, and the imaginative way it responds to the complex issue of nationhood and interdependence. "We selected the proposal because the ideas it presented were amongst the most captivating, surprising and artistically diverse. We are confident that it will generate debate and be a highly engaging experience for the audience."

Erkka Nissinen (1975, Helsinki) has over the years created a series of video works and installations featuring a resourceful do-it-yourself deployment of both vernacular and digital tools (such as hand puppeteering and crude 3D animation) to craft an absurdist comical-philosophical universe. Here, topics such as social interaction, sexuality, violence and the origins of human consciousness and creativity are addressed in cartoonesque narratives populated by a cast of hyperbolic characters, often performed by the artist himself. Nissinen lives and works in New York, Helsinki and Amsterdam.

Nathaniel Mellors (1974, UK) is an Amsterdam and Los Angeles based artist working across a wide range of media. His absurdist drama series Ourhouse (2010–ongoing) about an eccentric British family and its entertainingly erratic interaction with reality, language, and power, has been central to a host of international exhibitions. In these exhibitions, video is typically presented alongside sculptural work, in which the ideas and characters present in the video's narrative are further elaborated. Mellors' work was part of the 2011 54th Venice Biennale's main exhibition ILLUMInations, curated by Bice Curiger.

Nissinen and Mellors met during their residency at the Rijksakademie in Amsterdam in 2007. They have been fervent admirers of each other's work since. The Aalto Natives is their first joint exhibition project.

Curator Xander Karskens (1973, the Netherlands), has worked on solo exhibitions with both Mellors and Nissinen in the past, in his capacity of curator of contemporary art at Frans Hals Museum | De Hallen Haarlem in the Netherlands, which holds works of both artists in its collection. Among other publications, Karskens co-edited Book A or Megacolon or For and Against Language (2010) by Nathaniel Mellors. He was the curator of international exhibitions and projects like Ghost in the system – scenarios for resistance at NCCA Moscow (2013) and FOCUS: the Netherlands at ARCOmadrid in 2012.